I am going to go out on a limb. Go out there with me for a bit. I've taken some drugs in my time. Admittedly, most were legal and common: caffeine, alcohol, aspirin, statins, the list is long. But I've also sampled a few currently on the illegal list: marijuana, mescaline, psilocybin. The line demarcating the two lists is largely drawn with a moral marker. As the creation and subsequent repeal of Prohibition makes clear that line is arbitrary and moveable.

Claims for the efficacy of marijuana for treating pain, the side effects of cancer therapies, and other maladies abound. Unfortunately, because the plant is still classified as a Schedule 1 drug (along with heroin) by the federal government, scientific studies that could support and quantify these claims are extremely difficult. Similarly, drugs like psilocybin and LSD, prior to the 70s, showed promise in treating a variety of psychological issues, but the "War on Drugs" took most of that research off the table. 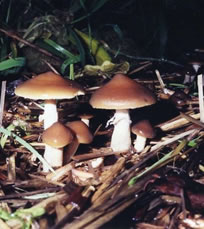 Things are beginning to change. As Michael Pollan wrote in the "The Trip Treatment" for the New Yorker there is resurgent interest in psychedelics. "Forty years after the Nixon Administration effectively shut down most psychedelic research, the government is gingerly allowing a small number of scientists to resume working with these powerful and still somewhat mysterious molecules."

This is particularly interesting for those facing the end of life. For many, knowing death is imminent can bring on paralyzing fear and depression that can be difficult to treat using traditional methods. Preliminary studies (although with very small numbers) have shown promise in relieving psychological pain with some lasting affect using psychotropics. "According to the researchers, psilocybin can achieve in one session what might otherwise take months or years, time some of these patients may not have." (Science Line)

Psilocybin is being looked at in particular as its properties are milder, with fewer side-effects and not as long lasting as LSD. But other lab created psychotropics such as MDMA are also being explored.

A few organizations leading the way in promoting this research include the Multidisciplinary Association for Psychedelic Studies (MAPS), River Styx Foundation and Compass Pathways.

With advances in scientific understanding of these drugs perhaps a sweet circle might be formed. The very substances that helped "launch" the Boomers may prove their value in easing anguish as those Boomers approach the end. "Nursing Home Rock"?