Book Review: The Consolations of Mortality 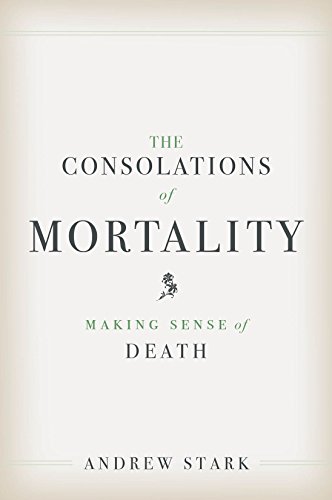 One of the distinguishing features of Homo Sapiens, supposedly, is that we possess the awareness of our own inevitable death. Of course, we don't know for sure that other creatures are not aware of their own mortality. But it's safe to say only humans have the capacity to express an existential dread of death.

So, if confronted with that dread, and lacking any faith in an afterlife, how does one cope? Where can one find some accommodation or comfort with that awareness? This is the question that Andrew Stark, professor of management and political science at the University of Toronto addresses in the book The Consolations of Mortality: Making Sense of Death.

Stark sets out on his quest by presenting what he sees as the main approaches to finding consolation in the face of the stark reality of mortality. He begins with Epicurus' dictum that while we are alive death cannot affect us and once we are dead we are no longer around to be harmed. From there Stark employs philosophical, literary and cultural references to dissect the major concepts employed in coming to terms with death.

While he claims his intention was to write the most upbeat book that he could, it's hardly full of good cheer. At each step of the way he holds up possible sources of consolation only to dismiss them as insufficient, psychologically impossible to accept. Still, the richness of the references (some of the footnotes run on to pages) provide much to ruminate on and perhaps come up with one's own consolation that satisfies.

This is, in fact, what the author does himself by the end of the book. No spoiler here, because whatever you might think of his solution, you would hardly be able to appreciate it without traveling the dark road he follows to get there. Even then, Stark knows his consolation may not satisfy, "...because what I have suggested isn’t likely to warm us emotionally." We might be able to accept his consolation and "...still ache at the thought that one day we will drink an espresso for the last time, or see a sunset for the last time, or make love for the last time.”